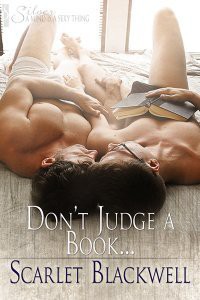 This is a sweet and cute story. Rhys was very much an ass in the beginning and he never apologizes for it, although he acknowledges it to himself. I'm not sure how much I liked his character but at least he didn't feel like every other MC in M/M stories. The fact that he's closeted is hilarious to me. I worked in libraries for seven years and 50% of the men who worked there were gay. Libraries are very liberal, much like Goodreads, and comparatively, it's an easy place to come out. I like Darren a lot and his motivations made sense. All of the characters were different individuals, which is always a plus.

The book was very predictable but sometimes formulas work fine. I'm a sucker for anything that takes place in a library. The story takes place in the UK, I'm pretty sure, and I was unfamiliar with some of the references but it didn't detract from the story. The happiness of the ending? HFN and I would be interested in seeing more from these characters.