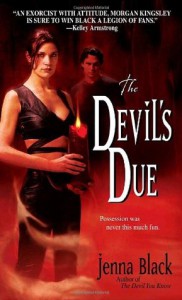 As usual, Morgan's mouth needs an off button but several times she forced herself to stop and acknowledged that maybe she's growing up. I still don't get what Brian sees in her because she's so angry and abrasive and closed off but I love his character and I'm glad there's a wonderful male love interest in UF who's nice and not scary and yet very much a man, even amid the testosterone flowing around him in barrels from the other characters. I really wish they'd get another female main character but I see why Black doesn't want to upset the dynamic.

The story worked for me and went on at a great clip. I read it in one sitting. I likes the character development--they're growing with each successive book and Morgan was faced with ethical issues this time around--but I think that Morgan's hatred of Adam is ridiculous and been carried on for too long. She keeps saying she hates and that he hates her but their actions don't back that up. His complaints about her are more exasperation than hate and mostly about her inability to stay out of trouble.

I like this take on demons but it's important to remember that these are not Judeo-Christian demons; they're more like demons from Hindu or Persian faiths where there isn't necessarily a "good" counterpart and they aren't always 100% evil, just mostly.